Begin the journey with this free novella and get the Loyal Knife update. 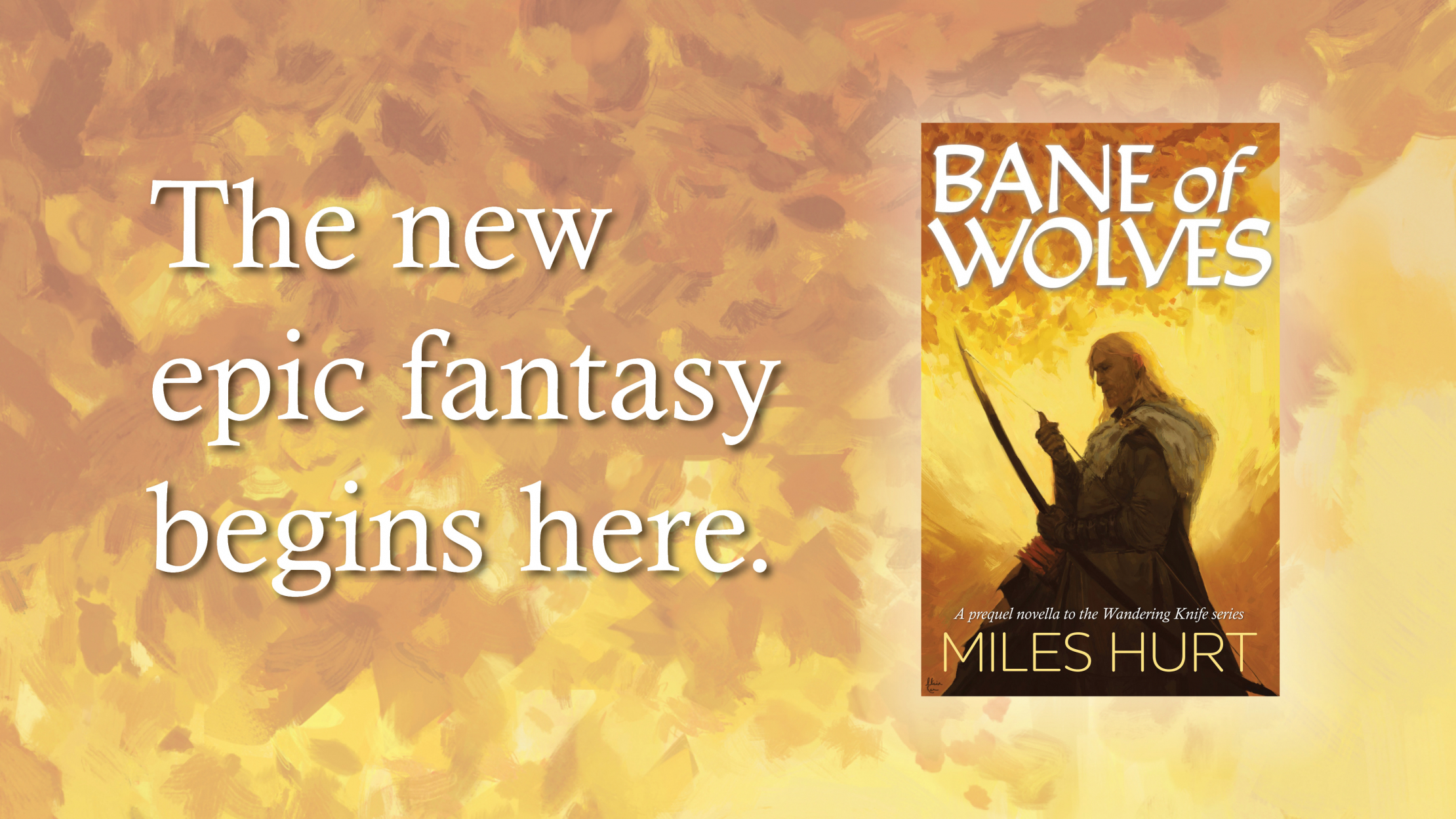 Two hours of fast-paced, thrilling fantasy await you! Get the novella instantly and step into the world of the Wandering Knife.

Elegant, personal and a joy to read. It’s a treat for the imagination. (FanFiAddict)

The excitement doesn't let up. It's bloody fun and not to be missed! (Goodreads review)

Miles Hurt paints a picture of a rich and detailed setting. It is filled with action and excitement. (PJ Wilson, author of Desperate Men)

The story has a flow to it, and the writing has a distinct style to it. It was a very fun and quick read! (Goodreads review)

Hands down my favorite book of Q1. Easiest read of the year. 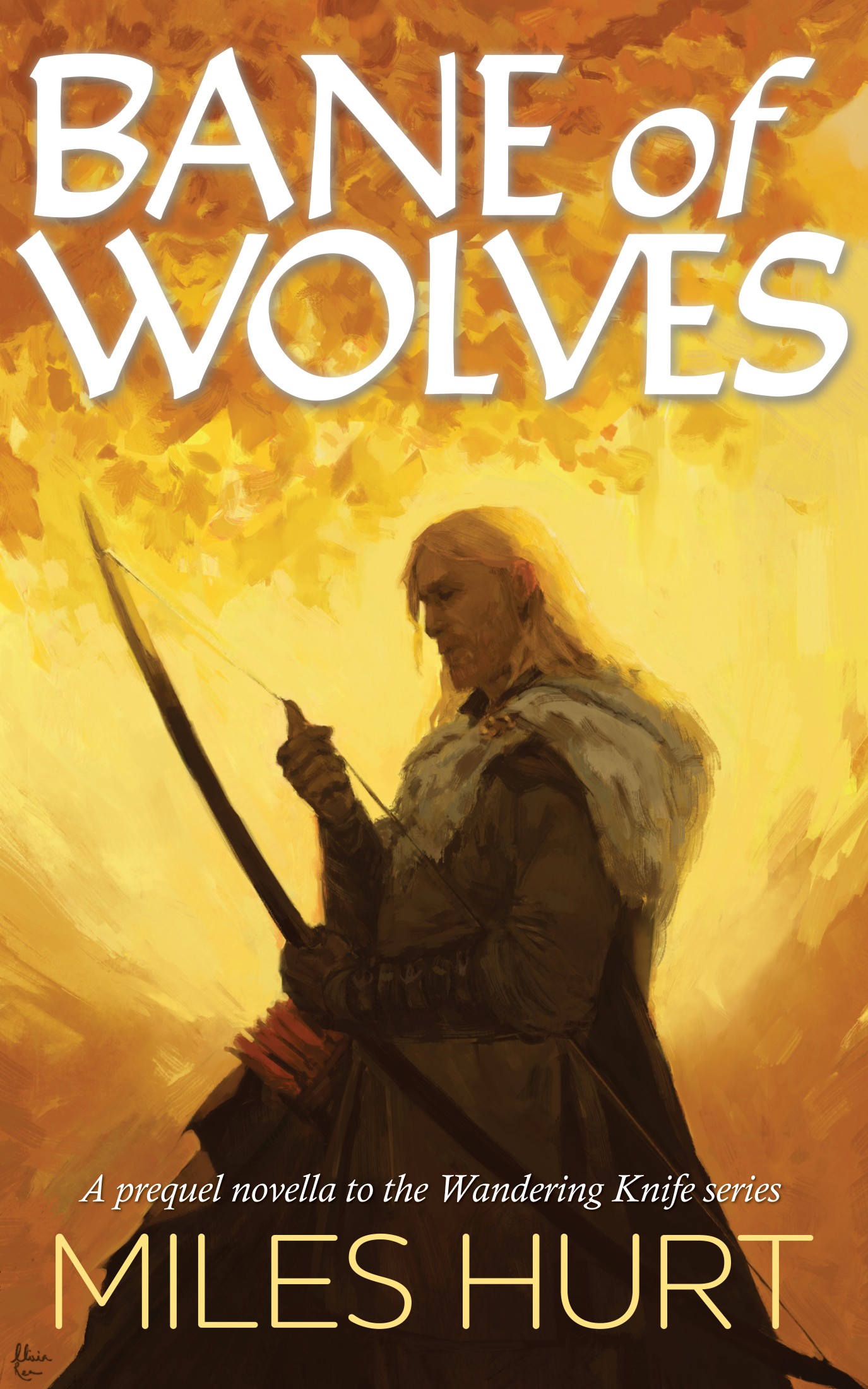 He awoke in the night to a sound of scratching. The hut was dark, the fire down to red embers.

The scratching came from outside, like claws on wood. His first thought was that it was Willan, back to confront him again. Or the dogs, come calling for scraps of meat and bone.

Through the slats of the hut, in the silver strips of moonlight, he saw shadows flitting.

Druun rolled off his pallet and reached for his spear.

'Who's there?' he demanded.

There were two things moving out there, snuffling and growling like animals. But they were tall, upright. Kline's portent came back to him, that he had somehow roused an evil spirit in the forest.

A chunk of metal punched through the wall of the hut. An axe head. It was wrenched away, leaving a hole.

Druun shoved his spear tip through the hole but hit only air. His spear was gripped from outside. The thing tried to wrench it from his grasp. Druun pulled back hard but couldn't free the spear.

The door burst open. In the darkness, ringed by pale moonlight, he caught sight of a wild man, with a mane of thick hair. Druun saw a short-handled axe in his hand.

The axeman closed with him, chopping down. Druun let go of his spear, dodging the blow. The brunt of the man's weight hit him. They wrestled, Druun realising he was in a desperate fight for life. He hefted the axeman into the air and bore him down onto the firepit, face first. A shower of sparks and smoke filled the hut, and there was a searing smell of burnt flesh. The axeman howled. Druun kept the man pinned in the pit with his knee, and scrabbled near his pallet for his hunting knife. As his hand closed over the hilt he heard a shriek behind him.

He rolled off the first attacker. Another axe chopped down at Druun, missing and biting into the dirt floor.

Druun thrust upwards with his knife, hitting the newcomer in the ribs, punching the blade through a loose smock. He rose, driving hard and slamming the assailant against the wall. The axe dropped to the floor.

Face to face, in the dim light, Druun saw a snarl full of twisted fangs and felt hot, foul breath. He stared into eyes shining yellow, aglow from within, and realised it was no man, but some corrupt thing.

A coil of revulsion tightened inside Druun. He grunted, stabbing the creature again and again. Blood dribbled from the creature's lips. It smiled at him, as though enjoying the violence of its own death. Then it died. Druun shoved it aside.

The first attacker rose from beside the firepit, blackened and blinded. Druun saw now that like the other, it was not human. It clawed at him, gripping him by the fur of his mantle and snarling, trying to bite him on the neck. Druun felt the moisture of its breath on his ear.

He brought his fist up sharply. A crack of jawbone and the thing went limp, stunned.

Druun let it fall to its knees. As though it were a barn animal, he slit its throat. Dark blood splashed out, hissing as it hit the fire. A stink filled the hut. The creature fell atop its fellow's body.

Druun sagged to the floor, gasping for breath. The hut was quiet after the sudden fight. The bodies lay akimbo, blood dripping. He wondered what he'd killed.

Druun dragged one of them through the door and into the moonlight. The light was bright, the moon one night short of being full. He used a stick to brush the tangled hair from the creature's face, not wanting to touch it. The yellow eyes gazed up, unseeing. At the sight of the bone-white skin, the cruel mouth of sharp teeth, he sprang back. It was some kind of evil spirit made flesh, or a demon.

This prequel novella tells the tale of Druun, hunter of wolves, prior to the events of Book One in the Wandering Knife series. Enter a new world of fantasy.