Daniel: Hope for the Faithful

Jump to Spring Schedule
Jump to About the Study
Subscribe to DeannaMunger.com

The Daniel series is complete! This page has all the study questions, reference material, and videos.  You can scroll down for earlier lessons.

(The end of the video contains a discussion about what we'll be studying next, in Fall 2022 / Spring 2023.  There is no more Daniel content after that discussion starts.)

You can also watch the Tuesday version of the same lesson here.

Reading Assignment and Study Questions for this lesson: Daniel 10:1 - 12:4

The final vision in chapters 10-12 is related to the same history that we learned for the visions in chapter 7 and 8 and that Gabriel spoke about at the end of chapter 9. (The text of the slides with historical points is available under Lesson 9 on https://www.subscribepage.com/danielstudy).

Daniel 11:5-20 focuses on the conflict between the Ptolemies in the south and the Seleucids in the north, a history spanning 148 years.

539 BC - Cyrus the Great of Persia conquered Babylon

538 BC – Cyrus allows Jews to return and rebuild

536 BC – the third year of Cyrus King of Persia

Reading Assignment and Study Questions for this lesson: Daniel 8, 1 Maccabees 1*

*The Maccabees are Deuterocanonical books, meaning books of the secondary canon – near Scripture, but not actually Scripture. Many Protestant translations do not include them, but they’re worth reading. Bible Gateway is a good place to find them online, and the RSV translation includes them. Try this link:

(538 BC Cyrus allows Jews to return and rebuild)

336 BC Alexander the Great becomes king of Greece

331 BC Persia falls to Greece

323 BC Alexander dies suddenly of a fever

301 BC Four generals ally to divide into four kingdoms

Antiochus IV Epiphanes (222-187BC):
Son of Antiochus III The Great

Hostage in Rome due to military reparations

Lost humiliatingly in next campaign in Egypt; took it out on Jews, responding brutally to resistance to Hellenization in Jerusalem

Reading Assignment and Study Questions for this lesson: Daniel 7

Reading Assignment and Study Questions for this lesson: Daniel 6

Assyrian Empire
(Took Northern Kingdom of Israel into Exile in 722BC)

Medes: north and east of
Mesopotamia
Cyrus the Great (559BC) king of
Persia
Persia rebels against the Medes
550BC Media falls to Persia

Reading Assignment and Study Questions for this lesson: Daniel 5

Babylonian Kings in the 2 Kings/Daniel period:

539 BC Cyrus the Persian attacks during a drunken festival and (supposedly) takes the city without a fight.

[Darius and the Medes are a separate puzzle, which we will not have time for today and will tackle next week.]

Reading Assignment and Study Questions for this lesson: Daniel 4

Reading Assignment and Study Questions for this lesson: Daniel 3

Reading Assignment and Study Questions for this lesson: Daniel 2

The chiastic structure of chapters 2-7:
A B C : Cʹ Bʹ Aʹ.
A Ch. 2: The King’s Dream - of four kingdoms (metals) followed by the kingdom of God
B Ch. 3: Deliverance from the Fiery Furnace – refusal to worship & king’s wrath
C Ch. 4: Judgment on a king (Nebuchadnezzar)
Cʹ Ch. 5: Judgment on a king (Belshazzar)
Bʹ Ch. 6: Deliverance from the Lions’ Den – refusal to pray to king & competitor’s spite
Aʹ Ch. 7: Daniel’s Dream - Vision of four kingdoms (beasts) followed by the kingdom of God

2. Roman: Babylon, Media/Persia, Greece, Rome. Jesus is born in the time of the Roman empire and his church spreads throughout the world.

3. Literary (the four kings mentioned in the stories in the Aramaic section of Daniel are described/foretold through the dream/vision): Nebuchadnezzar, Belshazzar, Darius the Mede, Cyrus the Persian.

What the schemes have in common is that human kingdoms rise and fall, but God is faithful to bring justice through his own kingdom.  This pattern happens in history, and eventually will happen completely!

Reading Assignment and Study Questions for this lesson: Daniel 1

1. What did we learn about the book of Daniel last week? When is it set? What genre is it? What did you think about Daniel’s authorship and date?

3. Consider the four young men in Daniel 1:6. What would their lives have been like up to this point?

4. Note the comparisons made in verses 10, 15, and 19-20. What does this  tell us about the experience of their years of training? Have you had a  time when you were being constantly compared against your peers?

Hebrew and Babylonian names of the four young men:

• Daniel “My judge is God” becomes Belteshazzar – "lord of the straitened treasure" (all the Babylonian name meanings are guesses and hard to make sense of. In Hebrew, the new names are nonsensical.)

You can also watch the Tuesday version of the same lesson here.

Babylonian Kings in this period:

- Usurped by Nabonidus (556 – 539BC) – last king of Babylon, from Haran where his mother was a priestess of moon god Sin. His preference for Sin angered Babylonians who worshiped Marduk. He abandoned Babylonia for Temia, a desert oasis, for 10 years. During that time the religiously important New Years Festival couldn’t be celebrated without him, which further outraged devotees.

- Belshazzar (not called king in Babylonian records – administration of Babylon delegated to him by Nabonidus) Thus, the Babylonians did not offer much resistance to the conquering Persians under Cyrus the Great in 539BC

Bonus Lesson - Tower of Babel: Making a Name for Ourselves

This is a bonus lesson for the series, Daniel: Hope for the Faithful, to be watched before or after Daniel Lesson 2. It can also be watched as a  standalone lesson.

Did you know that the Hebrew word for Babel can also be translated Babylon? It's the same place! So what is so bad about the tower- building in Genesis 11? Surely God isn't actually worried that they are going to get to "heaven" and reach him? Come hear how this story is the culmination of the sad story of fracturing humanity in Genesis 3-11!

God's response to the Rebellion in the Garden - Genesis 3:22

(plus some other verses below, designed to give us a little preview of the book!).

1. When does the beginning of Daniel occur with respect to the larger story of Israel? If you are familiar with the Old Testament, try making a quick timeline (skip the dates unless you want to add some!) of the major events of Biblical history. Mark where the story of Daniel fits.

2. We will be discussing authorship of Daniel in class. Read these passages to see what you can determine about who wrote the book of Daniel – does the book itself specify an author? Which parts are written in first person versus third person? Did Jesus say anything about the author of the book?

4. Compare these two passages: Isaiah 1:2-4; Daniel 7:2-4. How are they similar? Different? What words would you use to describe the Daniel passage?

You can also watch the Tuesday version of this lesson here.

A different genre: Apocalyptic Literature
• Prominent between 200BC and 300AD
• Originates in groups that see themselves as disenfranchised and are worried that they are powerless in the face of evil
• Uses first person in accounts of visions, often in the voice of a wise person of the past
• Uses coded language such as animals and numbers as symbols
• Includes interpretation by celestial intermediaries (such as angels)
• Describes history in periods that show the triumph of good over evil
• Discloses divine mysteries (partially!)
• Provides hope beyond the limitations of this world

Love what you see? Wish you could buy Deanna a coffee in support of this free content? Now you can! buymeacoffee.com/deannamunger

Spring Semester Schedule: Meeting weekly with a break for service projects the last week of each month. 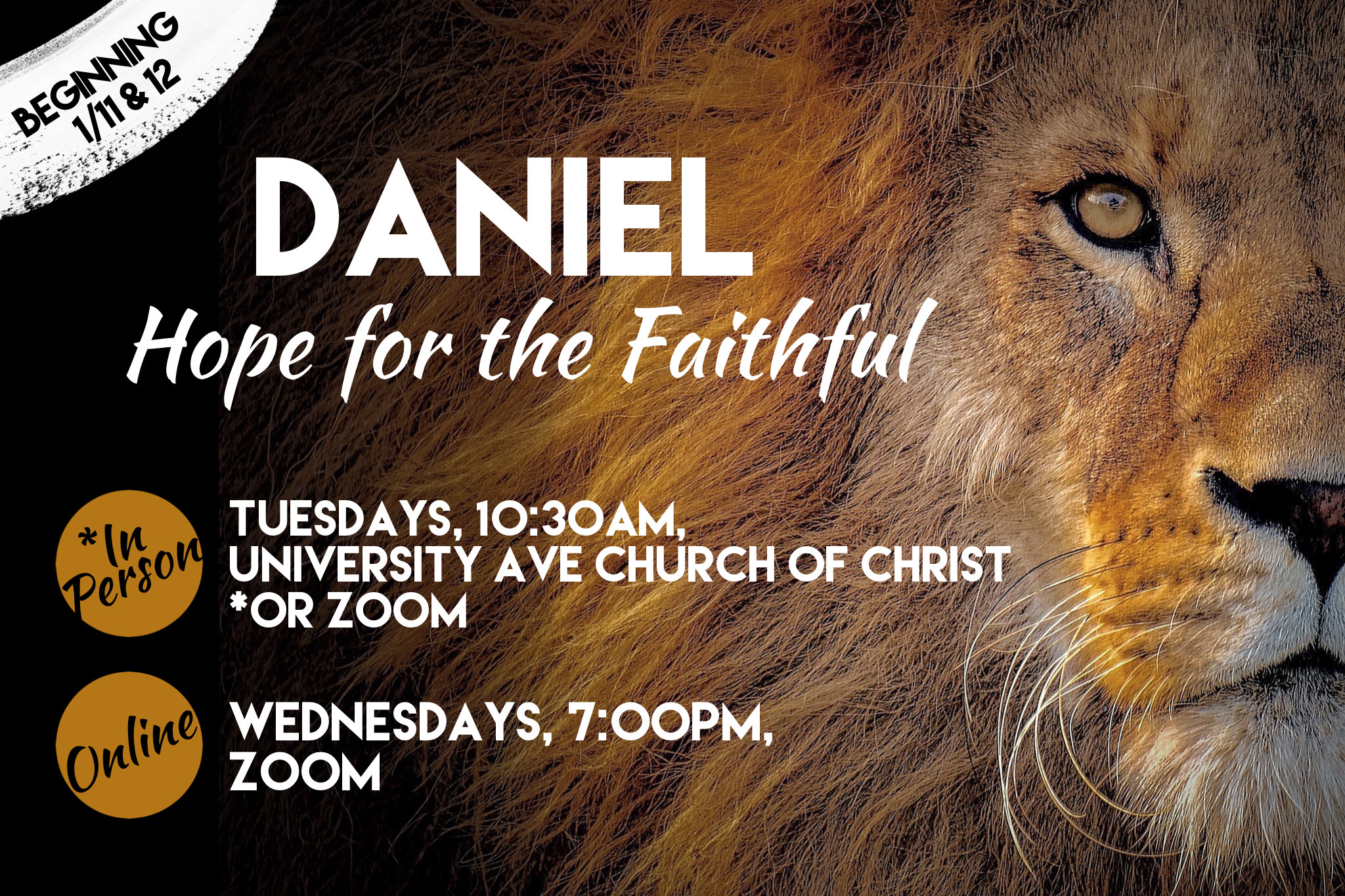 About this In-depth, discussion-based study

Join our spring Bible Study on the Biblical book of Daniel, which is set during the exile of the Israelites in Babylon. It's about the near-martyrs and their heroic faithfulness to the God of Israel, about what happens when human kingdoms don't acknowledge God's kingdom, and about hope in God and how it leads us to faithfulness.

The class will provide lots of fascinating content about this ancient text, plus opportunity for  discussion with great, welcoming women!

Choose between in-person on Tuesdays at 10:30am Central in downtown Austin, Tx (Zoom also available) or online via Zoom on Wednesdays at 7pm Central.

Thank you for getting in touch!

One of our colleagues will get back to you shortly.

Have a great day!

Love what you see? Wish you could buy Deanna a coffee in support of this free content? Now you can! buymeacoffee.com/deannamunger