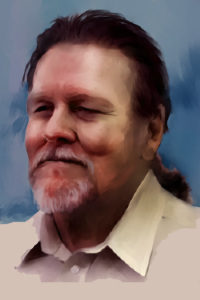 Early in his life, Tom Fallwell discovered a love for the wonderful escape into realms undreamed of through books of Fantasy and Science-Fiction. Weaned on greats like J.R.R. Tolkien, Isaac Asimov, Ray Bradbury, Arthur C. Clarke, Robert E. Howard, Roger Zelazny, Robert A. Heinlein, and Michael Moorcock, to name a few, Tom's imagination was forever inspired by those marvelous tales.

One day, he discovered a simple book of medieval battle rules called Chainmail, by Gary Gygax, and found a new love. The love of creating adventures and stories of his own for other players to experience. Chainmail evolved into Dungeons & Dragons, and Tom played consistently with friends as both a player and a dungeon master (DM). Such activities fueled his desire to create worlds and stories from his own imagination.

Now retired after a long career as a software developer, Tom now writes about all the adventures and characters that constantly fill his mind, and gleefully shares them with the world.