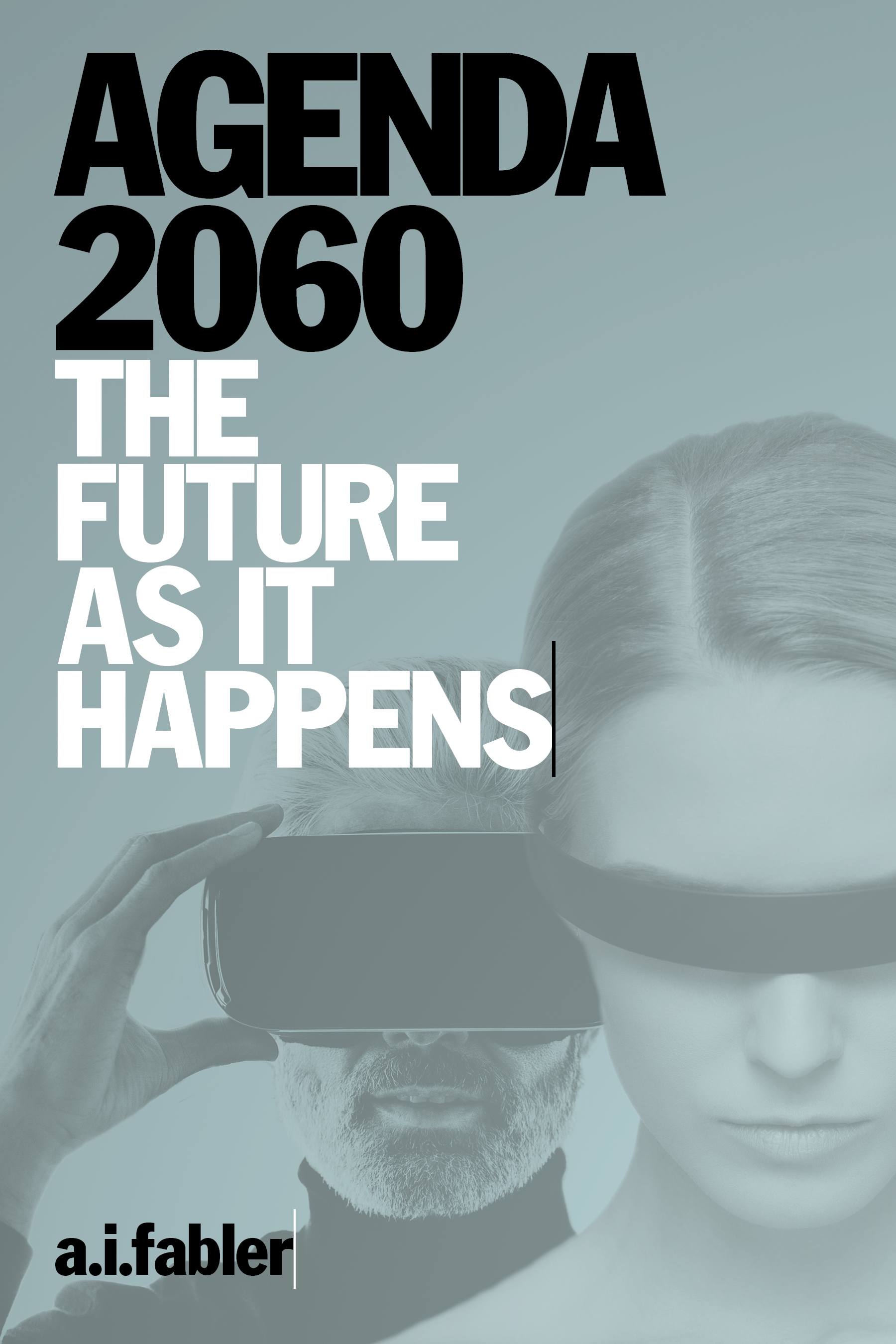 A. I. Fabler is the pseudonym of the artificial intelligence narrator of “AGENDA 2060: The Future as it Happens”. At the time of writing, in 2020, algorithms were designed as servants of their creators, though self-supervised A.I. learning now casts a shadow over that assumption. We already have software that enables A.I. to review its own work, analyze its shortcomings and rewrite its own code. A.I.s are creative without human input, so who’s to say who wrote what we’re reading? Step into the metaverse in 2021 and imagine yourself still there in 2060. You’ll be living in a computer simulation, and maybe always have been.

To understand how A.I. Fabler’s creator chose that name as a pseudonym you will need to read to the very end of “Agenda 2060: The Future as It Happens”. Suffice to say, the creator has had to rely on his human imagination to write about the future. His view derives from a lifetime as a fascinated observer and commentator on technology, post-modernism and social dynamics, leading to the conclusion that human nature is essentially immutable, and humor is the best defense against it when reason fails. But, as Peter Ustinov said, “Comedy is simply a funny way of being serious”.

So how did he get to this point? He was born in New Zealand, at the bottom of the world, and escaped by joining the navy at the age of sixteen, jumping ship into journalism in Australia, and writing ‘penny dreadful’ mysteries and advertising copy to earn a ticket to the beckoning world of London and Paris at the age of 21. Copywriting and brand promotion led him to start his own agency in London and thence New York, all the while writing plays and novellas. (Because that’s what writers do: they write.) After three decades of procrastination – including making the world’s best Syrah wine in 2006 (yes, really!), and show running two billion-dollar property IPOs – he decided to take himself seriously in 2013 and get down to the business of writing full time.

Since then he’s won some screenwriting awards, including a Drama Award at the Cannes Screenwriters Competition, and the Empire Drama Award at the New York Screenwriters Competition. His published fiction, and that which remains in development, draws on his Renaissance man years in advertising and journalism, corporate finance and the making of award winning wines, in a life spread across Europe, North America, Australia and New Zealand, providing him with a rich lode of experiences and locations to mine for his characters and their stories.

His three favorite authors are John Le Carré, Michel Houellebecq and Kurt Vonnegut. For opinion and philosophy, he goes to Bertrand Russell, John Gray and Christopher Hitchens. For music he falls back on Nina Simone, Van Morrison and Leonard Cohen. Movies he wished he could have made include David Mamet’s “Wag the Dog”, Woody Allen’s “Midnight in Paris”, and David Lynch’s “Mulholland Drive”. For love he has a daughter, two sons and a discreet object of affection.

Politically he wavers between distrust and outright loathing of all who seek to govern. Don’t ask him for a party vote. His view of the future? Bad times pass, if you wait long enough. Unfortunately, so too do good times.

The Author’s Inspiration for “AGENDA 2060: The Future as It Happens”

Q: What sparked the idea for your book?

AF: I was at an artist and writer’s retreat in Florence attended by a number of US academics, as well as creatives from a variety of countries, and we tended to gather in the evening to eat and talk over our projects. It was obvious that the academics, in particular, were very inhibited when it came to discussing politics, and social and economic issues. This was during the Trump years. I had lived and worked in Europe and the Asia/Pacific Region for decades and not experienced such tension and hesitancy around free-wheeling conversation when it touched on topics such as gender and racial issues, climate change and cancel culture. These were intelligent people who seemed to have dug themselves into entrenched positions, regarding alternative views as hand grenades.

At the time, I was writing a comedy about two movie makers facing old age. One of the academics’ wives, her face rigid with indignation, wondered if it was a fit subject, being both ageist and sexist (she may have added racist, as well!). Nothing closes down conversation like those epithets, so I turned my attention to the Chianti, while wondering how far I could stretch absurdity before they surrendered and realized uncensored words weren’t going to kill them.

The following day I wrote a skit about minority groups going to extremes to try and outpoint each other in their claims for victim status, stretching the absurdity of the story almost to breaking point. The starting premise was credible, but the way the characters’ behavior quickly spiraled into the realms of insanity somehow freed these people from their conscription to political correctness, enabling them to laugh.

The lesson was obvious: these subjects were so serious that they could only be treated as comedy.

Q: How did this skit turn into a full length novel?

AF: I created a couple of sane characters around whom the insane behavior could swirl; one a deplatformed math professor, and the other his brilliant ex-student, now a poster girl for the Deep State. My companions on the other side of the table had no difficulty recognizing my very deliberate type casting. By the time I left Florence I had half a dozen skits on my laptop and a mind bubbling over with ideas for more. There was no shortage of hot-button topics, as you can imagine. It’s the Baader-Meinhof phenomenon: once you become aware of something, you see it everywhere. When I came to list them, it struck me that they had all started with an ideal. Broadly speaking, those ideals related to Social Justice aspirations, Climate and Ecology concerns, and Economic dysfunctions. When I expressed those starting ideals in writing, they sounded remarkably similar to the United Nations and World Economic Forum ideals contained in such documents as Agenda 21 and Agenda 2030. That’s what gave me the structure for a book-length treatment.

Setting it in the future allowed me to take liberties with the absurdist elements and to claim the title of Agenda 2060. The characters would carry the story dramatically and emotionally by struggling with the unforeseen consequences of the ideals expressed in Agenda 2060, and thereby become surrogates for the reader.

Q: To what extent did you bring your own bias to the storylines?

AF: I was absolutely determined not to lapse into writing a polemic. The bookshelves and airwaves are full of them. Everything in life becomes absurd if you take it to its fullest extreme. Even Hitler. I didn’t set out to condemn the underlying ideals. I set out to remove the tension from discussion of those ideals. I like Peter Ustinov’s explanation, that “Comedy is simply a funny way of being serious”. Of the two main characters, Jordan is a victim of cancel culture, and Alexa is a beneficiary of the woke State policies, yet neither of them expresses an outright rejection of the idealistic aims contained in the Twelve Articles of Agenda 2060. Their criticisms are focused on the behavior of the people manipulating those ideals for their own ends.

Q: What do you see as being the message of this book?

AF: There was no intended message written down in advance. My intention was to open up difficult subjects for examination by the reader through the simple device of absurdist comedy. A message – in the high level sense – usually reveals itself to the author as he or she comes close to the end of a project and realizes that all the decisions made along the way have produced a result. For me, the result is that we are not far apart in what we want for the world, we have just lost the ability to talk about it good-naturedly. A view doesn’t carry more weight when we scream it out loud so that it drowns out all other views. It is not a triumph of opinion when other people are made too afraid to express a contrary one. What happens to the freedom of the individual when that individual is forced to hide his or her identity under the protective blanket of a group?

Hopefully, this book will help emancipate the reader from the grip of the Collective Psychosis, and from the fatal loss of personal identity that results from surrendering to the Group Psyche. More importantly, it needs to be fun to read.

For further information or a pdf copy, please email enquiries@agenda2060.com