What's the Book About?

Finding the classic car of your dreams isn't impossible, but where do you start? Should you look to a dealer or a private seller? Should you take your chances with the auction? What questions should you ask before signing any paperwork on an older car? And when you finally find the classic vehicle you have always wanted, what is the best way to enjoy it?

Whether you are entering the hobby for the first time, or you are a seasoned veteran, The Collector Car Hobby by Richard Reina covers everything you need to know. From researching your find to keeping it maintained so you can drive it for years to come, this free e-book is a must for everyone who is immersed in the classic and collector car hobby. 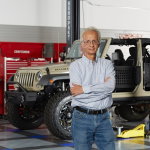 Richard has been an auto enthusiast since the age of two when his dad taught him the difference between a Chevy and a Ford. After a childhood spent building car models while his siblings watched TV, he decided to make a career of it, working for the U.S. importer of a major European auto manufacturer for over 20 years. During that time, Richard held a variety of service and technical positions within the company, and even got to tour a few car factories in Europe.

At present, to satisfy his love of anything Italian, he owns a 1967 Alfa Romeo Giulia coupe. On the days when the Alfa is being serviced, he enjoys his first-generation Mazda Miata (but both get stored away during winters). Richard is also passionate about music, especially classic rock and especially the Beatles. He currently works as the Product Training Director at CARiD.com, an aftermarket automotive retailer.